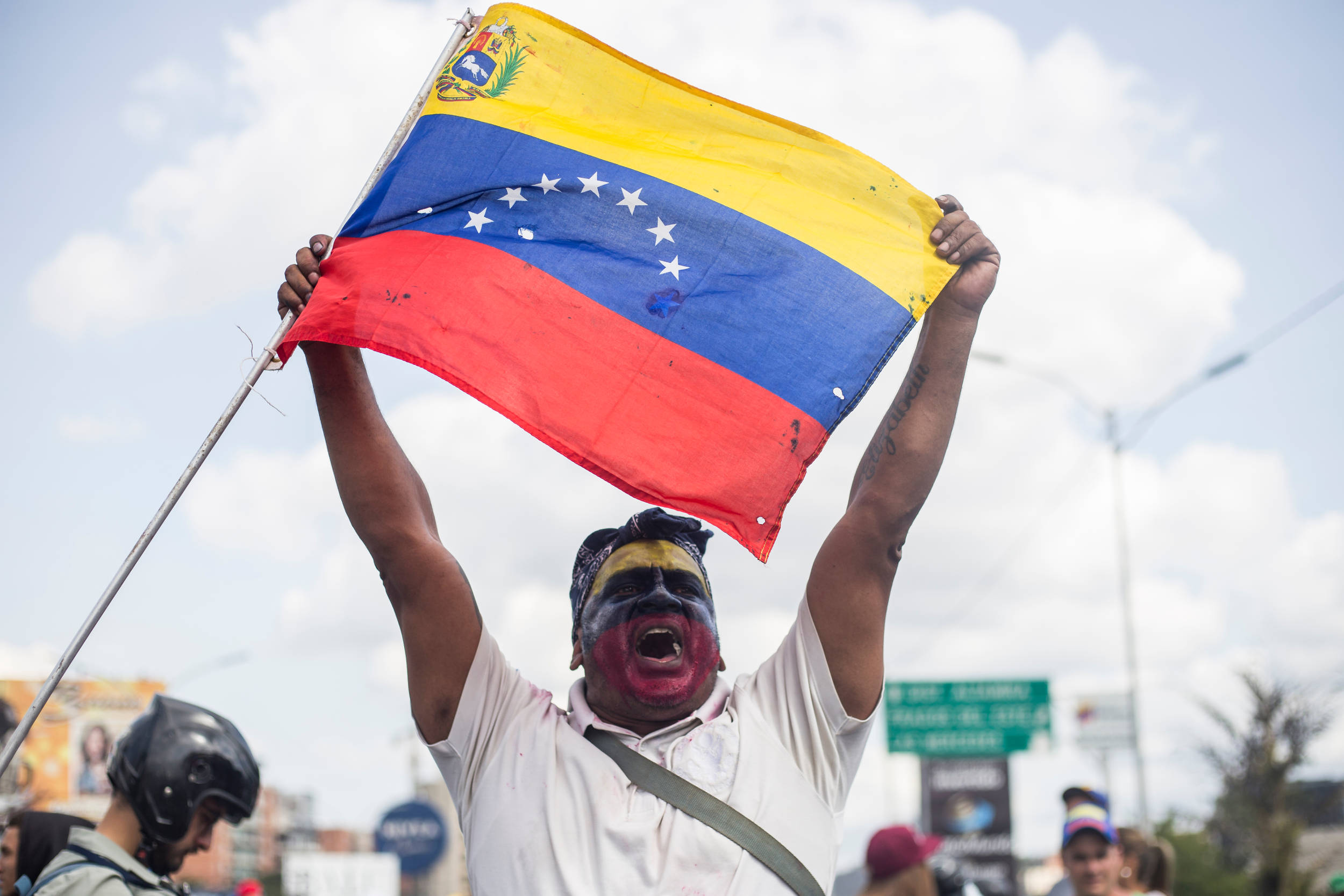 While the Venezuelan economy continues to be on a downward spiral, its citizens are starting to turn to an alternative to the Venezuelan Bolivar, and that is cryptocurrency. As a result of the hyperinflation rates in the country hitting 10 million percent last year, Venezuela is now placing third on Chainalysis’ Global Crypto Adoption Index.

Even though Venezuela was once the richest country in Latin America, which still has the world’s largest oil reserve, its currency is now practically worthless after suffering one of the largest hyperinflation since World War II. The crisis has also been marked by rampant corruption, high homicide rates, food and medicine shortages, and millions leaving the country to find a better way of life.

While things were not always this way, the current situation can still be connected to the country’s last president, Hugo Chávez, who was a legendary figure in Venezuela. Coming into power in 1999, Chávez used a global oil boom, which was responsible for about a trillion dollars pouring into the treasury during his tenure. By nationalizing industries and funneling large amounts of government money into social programs, Chávez was able to halve the unemployment rate, double the income per capita, improve education, and reduce the poverty rate.

Loved by Venezuela’s poor and working classes, Chávez was an innovator in how to spend money, but sadly he did little to improve how the country actually made money. After passing away from cancer in 2013, Chávez was succeeded by his vice president Nicolás Maduro, who narrowly won the elections that took place shortly thereafter. Although he tried to replicate Chávez’s success, and continue his socialist policies, Maduro was largely unsuccessful.

Venezuela’s problems started to surface in 2014, when the price of oil began to sharply decline, going from around $110 a barrel in 2014 to below $48 a barrel at the start of 2015. With the country’s dependency on oil money, its economy started to replicate the crash in oil prices, and began a downward spiral. Even though the price of the bolivar went further and further down, Maduro continued to support the government-sponsored socialist programs, and in order to pay its bills, the government printed more money. With the increased supply of currency, the value of the Bolivar was pushed even further down, which resulted in the government printing more money, and on and on.

Through this vicious cycle, the socialist-focused government of Maduro steered the country to the worst economic meltdown in history. The growing political discontent even prompted the leader of the opposition, Juan Guaidó, to declare himself the acting president on 23 January 2019, only two weeks after Maduro was sworn into office for the second time. Even though more than 50 countries recognised Guaidó as the legitimate president, the Venezuelan military continues to be loyal to Maduro, whose socialist party continues to have a firm grip on the electoral body and the supreme court.

Protests against the socialist party have also been a constant presence in the country. One of the most memorable was conducted in February 2019, when thousands took to the streets, calling on Maduro to let humanitarian aid into the economically crippled country. At the time, the U.S. had sent food and medicine aid to the country’s borders on request by Guaidó, but Maduro was rejecting the help, saying:

“We are not beggars. You want to humiliate Venezuela, and I will not let our people be humiliated.”

One of the culprits for the shortages that plague the country could be the socialist polices that Chávez followed. In order to make basic goods more affordable to the poor, Chávez capped the price of flour, cooking oil and other goods, which in fact resulted in Venezuelan businesses stopping production, as they were no longer profitable.

The lack of production in the country resulted in the ever-increasing prices of goods, which impacted the country in a big way. According to the 2019–2020 National Survey of Living Conditions, conducted by the Andrés Bello Catholic University in Caracas, 96% of Venezuelans live in poverty, while 70% live in extreme poverty. The survey also showed that only 3% of households in the country were considered food secure, which means that the majority of the country has to wonder on a daily basis where their next meal will come from.

Cryptocurrency To The Rescue

With the local currency becoming useless, Venezuelan citizens began converting their savings into more stable currencies, like the U.S. dollar. The government, however, responded by issuing currency controls, such as setting a fixed exchange rate, and making it difficult to receive permission to even exchange bolivars into U.S. dollars. Presented with another challenge, people had to get creative, and eventually turned to cryptocurrency.

According to a study published by Chainalysis, cryptocurrency has taken on an important role in the country’s economy, with its usage placing Venezuela in third place on the firm’s Global Crypto Adoption Index. The populace has turned to crypto in order to preserve their savings against the inflation, receive remittances from abroad, as well as to buy goods and services outside the government system. Despite cryptocurrency’s infamous volatility, it is nothing compared to what has happened to the Venezuelan bolivar.

Crypto can not only be sent overseas faster and with lower fees, but it does not require a bank account. Moises Rendon, a Venezuela expert at the Center for Strategic & International Studies (CSIS), commented on how hard it is for Venezuelans to open a bank account:

“American banks, which offer money transfer services like Bank of America’s Zelle, began closing Venezuelans’ bank accounts because of sanctions concerns, as the balances on these accounts aren’t high enough to justify the banks’ costs of monitoring for sanctions violations.”

While the Maduro regime has given seven crypto exchanges permission to operate in the country, the citizens’ distrust in the government has pushed them more to peer-to-peer (P2P) exchange activity. Most of the trading happens on P2P exchange LocalBitcoins, Chainalysis noted, with the country being the third most active on the platform. The graph bellow could indicate that Venezuelans are converting more and more of their wealth into cryptocurrency, as a result of the hyperinflation.

And it’s not only citizens who are turning to crypto, but businesses as well. Back in May 2020, cryptocurrency merchant-gateway startup Cryptobuyer announced a partnership with Venezuelan company MegaSoft, which processes payments for thousands of local businesses. Through this partnership, MegaSoft’s platform will be enabled to accept cryptocurrencies such as Bitcoin, Ethereum, Dash, Litecoin, Tehter and many others. With this, over 20,000 shops and enterprises in the country will be able to start accepting crypto, with the ability to instantly convert it to fiat.

The government has also tried to tap into the cryptocurrency sector, but with little success. Towards the end of 2017, when cryptocurrency prices were booming, president Maduro announced the government’s plans to create a cryptocurrency backed by oil reserves, called the “Petro”. During a television broadcast, Maduro said that the Petro would help Venezuela “advance in issues of monetary sovereignty, to make financial transactions and overcome the financial blockade”.

Since its creation, the government has tried its best to popularise the use of Petro in the country. Back in November 2017, local news outlet Venepress reported that president Maduro was planning to pay the country’s retirees and pensioners Christmas bonuses in Petro. Then in August 2020, the Bolivarian Council of Mayors in Venezuela signed the “National Tax Harmonization Agreement”, which included the Petro as a means of paying taxes and sanctions in the 305 municipalities in the country.

The Venezuelan government has so far given seven crypto exchanges licenses to trade Petro in the country, alongside other cryptocurrencies such as Bitcoin. While these exchanges’ transfer volumes have skyrocketed in the past year, they don’t seem to be used, or help, by the majority of the populace. In its report, Chainalysis investigates one of those exchanges, Criptolago, which is governed by Omar Prieto, the Zulia state’s governor who is an ally of Maduro.

According to the investigation, over the past year, the exchange has received more than $380,000 worth of Bitcoin from 3,916 transfers, while it sent over $360,000 in 2,297 transfers. While this indicates a 13x growth, more than 75% of the transfers were made in $1,000 USD or more worth of cryptocurrency. Chainalysis noted that the average Venezuelan earns around $0.72 a day, which would show that the majority of the transfers were not made by everyday Venezuelans.

“I suspect that most of the users of this platform are people close to the Maduro regime or otherwise able to take advantage of Venezuela’s corruption to make money — the large transfers on Criptolago are likely them trying to preserve this wealth or move it somewhere to evade sanctions, as most of these high profile Venezuelans can’t open bank accounts in other countries.”

In a country where the local currency is so undervalued it is now quicker to weigh the money instead of counting it, cryptocurrency has started to make a change. While still far from inclusive for all citizens, the system has allowed an increasing amount of Venezuelans to preserve some portion of their wealth. It has also enabled them to receive money from their family and friends abroad, without the need to pay hefty transfer fees. And while it may be used by the country’s elite, connected to the Maduro regime, to bypass international sanctions, it is enabling those who need it the most to preserve their savings in the face of complete monetary devaluation.

Vee Finance Exploited for $35M Worth of BTC and ETH