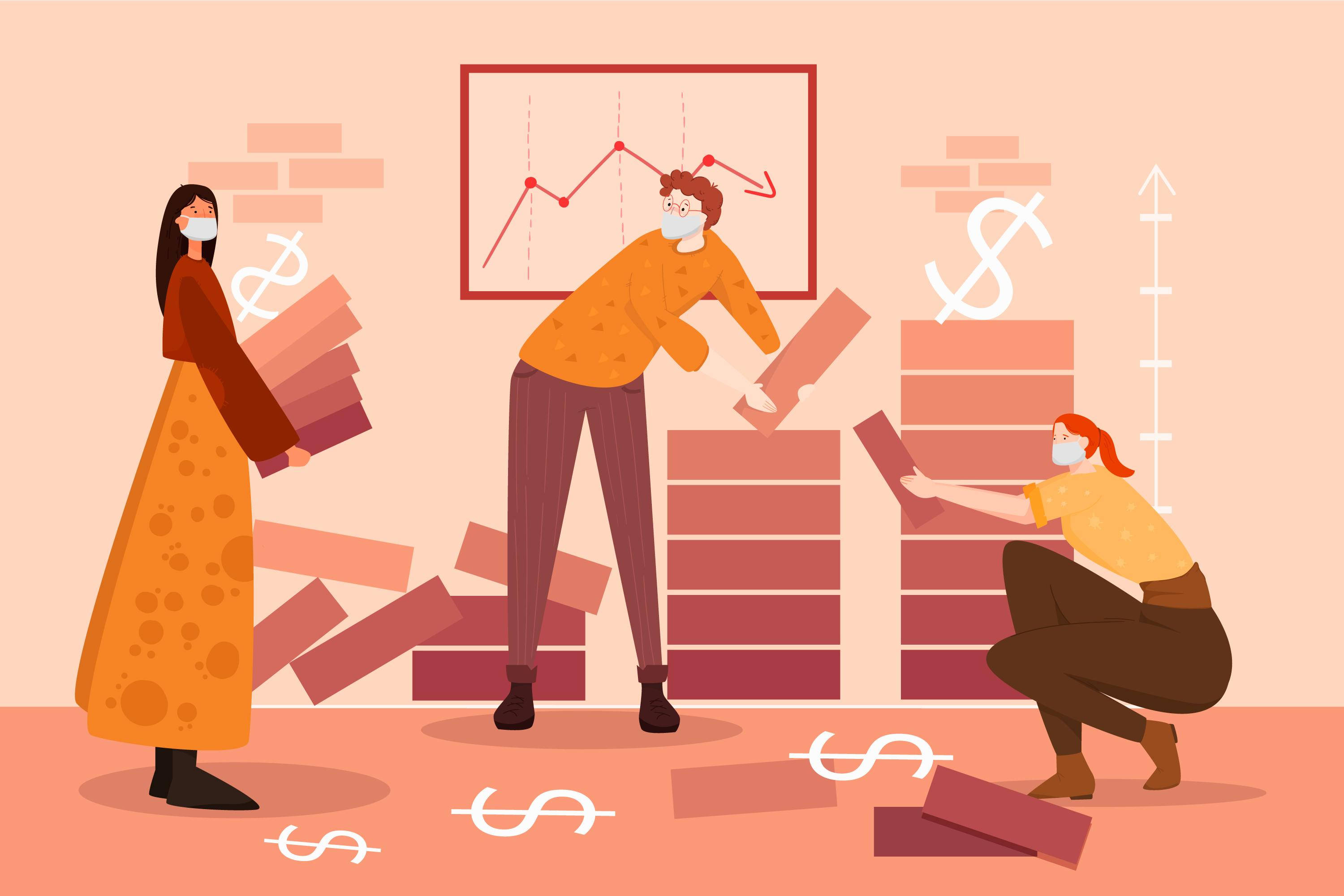 Money as we know it is changing. Though the circumstances which have led to this shift are unarguably terrible, whether by necessity or by natural evolution, cryptocurrency and blockchain technology are changing the global economy.

The Bitcoin halving event of May 2020 was stifled by pandemia, global economic disaster and civil unrest. While traditional markets have plummeted globally, much of the speculation around the halving based upon historic indicators was not realised as many had anticipated. The effects of miner capitulation and FUD on the cryptocurrency market were offset by an unprecedented chain of global events. Desperate times indeed call for desperate measures. The innovation that has been dismissed time and again over the last decade has had it’s comeuppance.

As governments across the globe continue with quantitative easing and other short-term attempts to stabilize broken economies, there is little wonder why so many people are looking for a safe alternative for the preservation of their wealth.

In isolation, it’s easy to understand how this could be overlooked, however, when the entire global economy experiences the same situation simultaneously, FUD and the increasing likelihood of hyperinflation have sparked global awareness around the perils of the traditional financial system and the need for a healthy alternative.

The Traditional Financial System Is Broken

The economic crisis is not restricted to developing countries and has been felt the world over. The difference in how different countries are reacting however, varies massively.

While some countries and governments rush to seize economic control and censor or prohibit any solution which may pose a potential threat to the traditional system, other countries are embracing the potential of cryptocurrency during hyperinflation.

Financial systems fail when the currency is manipulated and returns on investments no longer provide value to the public. When the economy doesn’t reflect the true value of things, people can’t afford to live. This is naturally demotivating when we see currencies and markets decoupling from their real world value.

If you live in a country with an economy in a constant state of inflation, you might see Bitcoin as a safe haven asset.

Though rules around cryptocurrency are becoming increasingly strict in many parts of the world, some people are relying on it for economic survival. Prior to the COVID-19 pandemic, many countries with high levels of inflation and corruption were unable to provide a safe store for wealth by use of a stable fiat currency. Since March of this year, we have seen the adoption of blockchain technology propelled in a number of instances by way of necessity.

When an economy is in decline and experiences hyperinflation, people will naturally look for any assets they can utilise to protect their wealth and preserve their purchasing power.

After The Great Depression of the 1920’s, people began to distrust banks, hiding money under mattresses and inside their homes. In some cases this distrust was passed down to following generations.

Human psychology is affected by catastrophe. The psychological effects of negative events last for generations and can be a catalyst for distrust.

Economies are essentially empires. Empires, just like economies, are cyclical in their nature. Historically, an empire’s growth has often been financed by the debasing of currency. Eventually the empire dies. Economies around the world are diminishing as countries scramble to support failing financial systems.

When a country lives beyond its means it can turn to austerity, debt and default, or they can print money. They call the process of printing money quantitative easing, veiling the reality of the operation with fanciful terminology so that fewer people ask fewer questions. This has happened time and time again throughout history.

The Solution: Verification Instead Of Trust

The impact of COVID-19 on the broader global economy is nuanced and complex. The side effects of the economic standstill were felt in every area of industry, from manufacturing right through to distribution and point of sale. As if physical limitations weren’t enough, the impact on global supply chains was also informed by changing consumer behaviours and buying habits.

Buyer trust across online markets is reliant on a manufacturer’s ability to provide safe and traceable products, incentivising online retailers to provide transparency across production and supply chains. According to a report published by Cointelegraph, better traceability could boost the international food trade by over $100 million per year.

The introduction of AI and machine learning have also paved the way for automation and traceability to improve food standards and save money by increasing efficiency while putting governance and regulation into the hands of those best equipped to implement it at a ground level.

DeFi is clearly the emerging trend in the digital gold rush of 2020. While the notion of borderless, censorship-resistant financial tools for everyone is attractive, the reality is that current protocols and applications tend to serve only a small handful of innovators, speculators and investors with a high risk tolerance – a far cry from liberating the unbanked, as per DeFi’s often dubious claims.

One of the most popular metrics used to assess adoption in Defi is Total Value Locked (TVL). While this does measure the value of tokens that are providing utility to a protocol, it does not reflect the actual number of participants.

When participation is no longer restricted by wealth or specialised knowledge, the site for widespread adoption could be huge. With the increase of infrastructure which relies on cryptographically-guaranteed immutability of transactions, there are a host of emerging economies which will directly benefit from being early adopters in the space.

Countries with a history of financial instability that are faced with economic turmoil and uncertainty generally have less to lose by investing in disruptive technologies. The prestige of a national currency can be prohibitive if it is threatened by technological advancements, while the upside potential increases for early adopters with smaller economic and diplomatic risk.

Is DeFi Just A Repeat Of The ICO Bubble?

At worst, this could perhaps be a repeat of 2017, and there remains a high possibility that the vast majority of players involved in the market currently won’t be around in a couple of years from now. This seems unlikely however, as most of the DeFi tokens of 2020 represent tangible value in fully operational protocols.

At best, DeFi (and blockchain technology as a whole) could incentivise financial integrity on an institutional level, underpinned by a lucrative industry of players that can benefit from maintaining security and transparency free from bureaucratic or technological gatekeepers.

DeFi Is Not Ready For Mainstream Adoption

“DeFi and Ethereum are not ready for mainstream adoption right now – if you are playing with it today you are a pioneer of a new technology.”

While Ethereum may be the dominant force in this coming cycle, the incentives for developers on other networks such as Cosmos are increasing as more people are priced out of transactions on Ethereum due to hefty gas fees. Developers on the whole may see Ethereum as the platform to build on, but the past few months have seen a number of cross-chain solutions and practical alternatives emerge that could have an impact on Ethereum’s dominance, providing new and exciting opportunities across networks which are far less-saturated.

The idea that a farmer in Africa can have the same access to financial instruments as a Wall Street banker remains elusive up until now. This could, however, be a catalyst for the development of similar applications which are tailored to smaller transactions from retail investors and participants with a modest budget.

Naturally though, in order to gain adoption there must be financial incentive. High gas fees could be an overall positive for Ethereum as increasing demand on the network encourages rapid scaling and development. Before yield farming had drawn the attention it enjoys today, low gas fees were met with significantly higher risk and a concentration of practical knowledge which halted development and restricted adoption. As applications and user interfaces are refined, the more demand there is to use these products and the easier it becomes for users to participate.

Small business owners and individuals may already enjoy the benefits of an over-collateralized on-chain loan at a time when bank loans are out of the question. Once the barrier for entry is fully lowered, this type of unbiased equity lays the path to financial freedom for almost everyone.

Blockchain technology has the capacity to radically improve the financial wellbeing of individuals and also improve the infrastructure that underpins many elements of everyday life.

Not long after PayPal, Visa and Mastercard announced crucial partnerships, this week it emerged that United States regulators will now allow national banks to hold cryptocurrency private keys on behalf of their clients.

Adoption comes slowly, then all at once.

Disruptive financial instruments no longer have to rely on traditional systems failing, instead they can compete and inform one-another. There is a clear demand for a zero-trust, inclusive financial system. Blockchain and cryptocurrency appear to be meeting this demand, while simultaneously informing many different areas of industry, promoting financial inclusion and carving out the path of technological progression.